Despite Rhetoric Not Much Urgency In Border Security 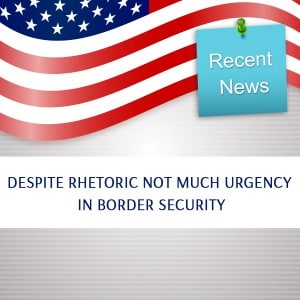 The alarming increase in last year’s surge of unaccompanied children and families who infiltrated into the border from Mexico and coming from countries of Central America has gone down considerably, almost by half, this year. According to a US Customs agency this has been due to some strict measures taken by the U S Government on the borders and some strict efforts by Mexico too.

By many standards the scenario is not so serious and urgent as it was last year – actions by the U S Government and other factors have contributed to the easing out of the crisis, which has been markedly high in the last decade.

Illegal immigration from Mexico too has gone down dramatically since the year 2000, when patrol officials had rounded up around 1.6 million Mexicans. Last year only 230,000 people had transgressed the borders. What’s more, according to an immigration report about 1 million Mexicans who were living illegally in the country have left the country.

“The urgency is gone on the U.S.-Mexico border,” said a border security analyst for the Washington Office on Latin America, a think tank.

Last year more than 468,000 arrived from countries of Central America, which happened to be more than those migrants from Mexico.