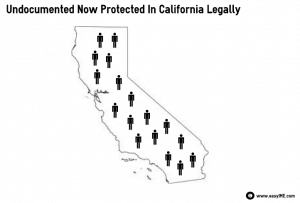 Governor Jerry Brown is considering a bill that aims to prohibit the police to deport illegal immigrants; however, this law would violate federal law.

The bill called the Trust Act would stop police from co-operating with Immigration and Customs enforcement officers on several listed cases. However, the bill applies only for those immigrants who have been arrested for minor crimes.

The bill is stirring controversy among sheriffs and prosecutors who believe that undocumented immigrants who are drug peddlers and burglars who have been deported several times are considered to be criminals with minor crimes in this bill.

Since, the bill violates federal statutes the California District Attorneys Association too is geared up to oppose this bill. They believe the bill is nonsensical.

On the other hand, the supporters believe that the bill is aimed at protecting innocent illegal immigrants who otherwise have no legal protection coming to their aid and are booked under midemeanors. However, critics argue that there are several loopholes in the bill that can easily be exploited and would let illegal immigrant suspects roam around free in the community.

The Governor has time until Oct 13 to veto or sign this bill.