Protestors chained themselves to buses and blocked entrance to federal courthouse in Arizona. The protests were held at immigration proceedings in Tucson which were carried out for deportations of illegal immigrants.

Two buses that were on their way to court for immigration cases were stopped for more than four hours from early morning as immigrant rights activists locked themselves to the vehicles. The other six chained themselves at one of the gates at the vehicle entrance at the court. Other demonstrators cheered the chained protestors.

According to ABC news, the 70 detainees remained in the bus throughout the protests. Authorities negotiated with the protest leaders but were compelled to forcibly remove them. The police had to cut the chains and arrest them. The six protestors at the courthouse gates voluntarily removed themselves after finding out the bus protest had come to an end.

The protests were targeted at controversial deportation program Operation Streamline where detainees meet attorneys on the morning of the court proceedings. However, since the detainees were unable to meet with their respective attorneys, the proceedings were cancelled.

Despite shutdown, the courthouse was functioning with reduced functions since the judiciary provides the funding for the operations. The proceedings will be delayed to next week after the federal holiday to decide the fate of the detainees.

The Council President at USCIS, Kenneth Palinkas, wrote that the House may be on a path that may lead to more obstacles and roadblocks for the USCIS agents to protect the nation’s security and the American Taxpayer. He added that according to media reports Majority leader Eric Cantor, Chairman Bob Goodlatte and Chairman Paul Ryan and Rep. Luis Gutierrez are working on proposals that are likely to open benefits of citizenship to illegal immigrants and expanding other visa programs. He warns that the piecemeal approach of passing a series of separate bills will use the Senate immigration bill as the starting point.

He says passing the bill would affect the way USCIS works which in turn will affect millions of citizenship, visa and green card applications currently under review. This would lead to widespread abuses that may invite disaster.

He believes that USCIS needs to be reformed first before the changes are made to the agency. The agency has been corrupted by politics before any amnesty proposal is brought up in the House.

Finally, he suggested that the taxpayer can be best served by screening new applicants and prevent abuses of immigrant benefits.

The US Immigration Medical Exam is mandatory as demanded by the USCIS, United States Citizenship and Immigration Services as a part of the US immigration process for obtaining a green card or for refugee asylum states or for certain non immigrant visas.

The medical examination is done to ascertain whether the individual is inadmissible to the United States on the grounds of public health and safety or not.

The green card aspirant needs to fill the i693 form part of which he needs to fill out himself and the remaining part needs to be filled in the by the civil surgeon during the medical examination.

The cost of the medical examination is not covered by medical insurance. It needs to be borne by the aspirant himself. However, it is advisable to check on it with the insurance provider and the civil surgeon prior to going for the medical exam. 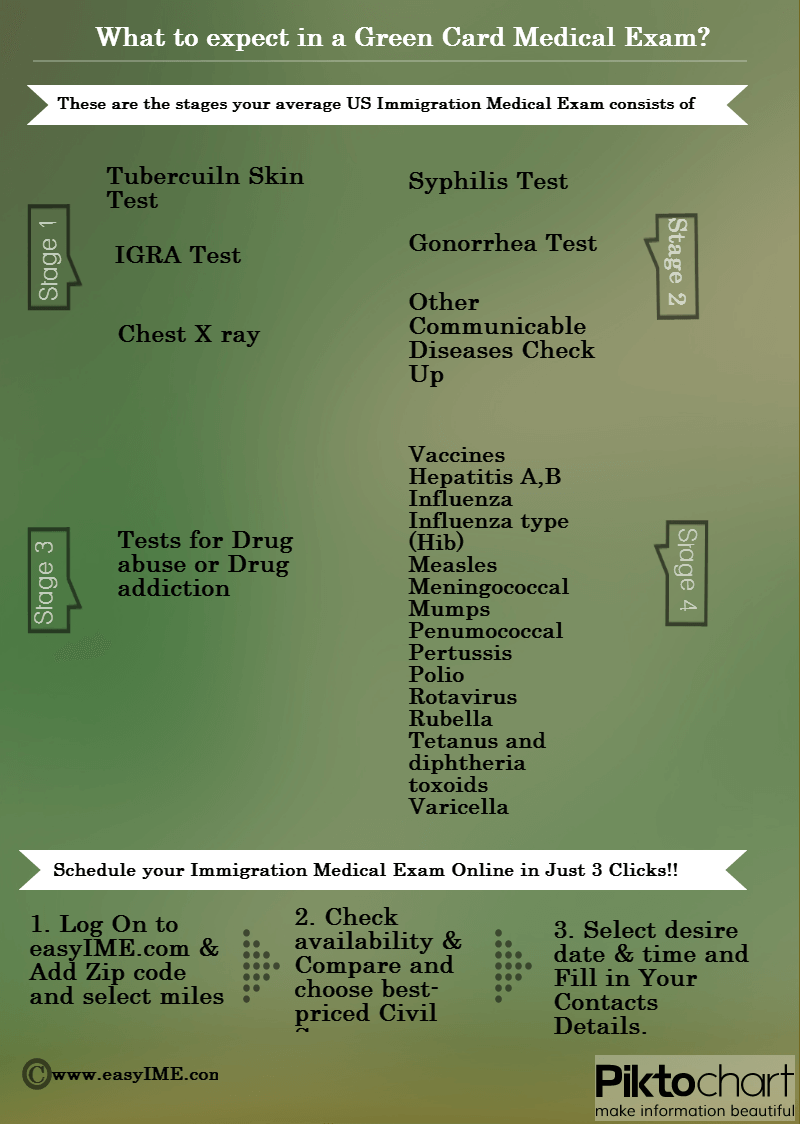 There are 4 stages of the green card medical exam

The first stage includes a check for Tuberculosis. A tuberculin skin test or IGRA test followed by a chest x ray will be done if the applicant tests positive for exposure to tuberculosis in the past.

The next step includes getting tested for Syphilis. Once the test is completed, you will be screened for Gonorrhea and other communicable diseases.

Stage 3 is where presence of drug abuse or drug addiction is checked. This includes any therapy, rehabilitation or referrals that may have been given to the aspirant in the past.

Finally in the fourth stage, the aspirant is administered a series of vaccines as specified by the CDC, Centre for Disease Control and Prevention. The vaccines administered are age appropriate. If you have taken any of these vaccines in the past, you need to obtain a certification from your health care provider to present to the civil surgeon during the examination confirming the same. Flu vaccine is given only during the flu season which lasts from October to March.

The tests usually take up 4 to 5 hours easily so it is advisable to take a day off for the medical examination. Some procedures especially the vaccination may need a follow up. You can either take the follow up dose from your civil surgeon or from your usual health care provider.

Once the tests are done, the civil surgeon will fill the i693 form, draft the results and hand them over to you in a sealed envelope. Before the results and the form are sealed, make sure that your name and other details are spelled correctly otherwise the USCIS will instantly reject the results. Make sure the seal is intact and is not tampered with or else it will not be accepted. Deliver the results within a week’s time.

Once you have delivered the results, the USCIS will take time to go through the findings since they have a huge backlog of such results to clear. So, patiently wait for their call.

All the best clearing your Immigration Medical Exam!

More than a dozen Congressional Democrats and four House Republicans came before the crowd to urge the house to take up the immigration reform bill for a vote. 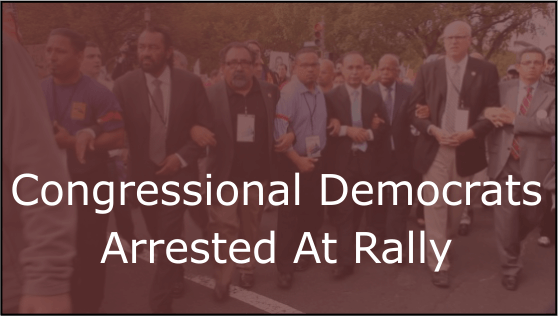 Thousands of activists waved and cheered displaying the signs that said “No Human is Illegal”. Children too were a part of this rally called “Camino Americano” and wore T shirts that read “Don’t Deport My Dad”.

According to an event spokeswoman, the National Park Service allowed the event to proceed because it fell under a First Amendment category which was closed due to the federal government shutdown.

“Camino Americano” followed events in more than 100 cities in 36 states across the nation on Saturday to make a similar push for comprehensive immigration reform.

The event was designed to pressure Congress and the House GOP to act on immigration reform this year.